What is AdMob plugin setting?

How to Use the AdMob Plug-in Settings

1. What is AdMob plugin settings? 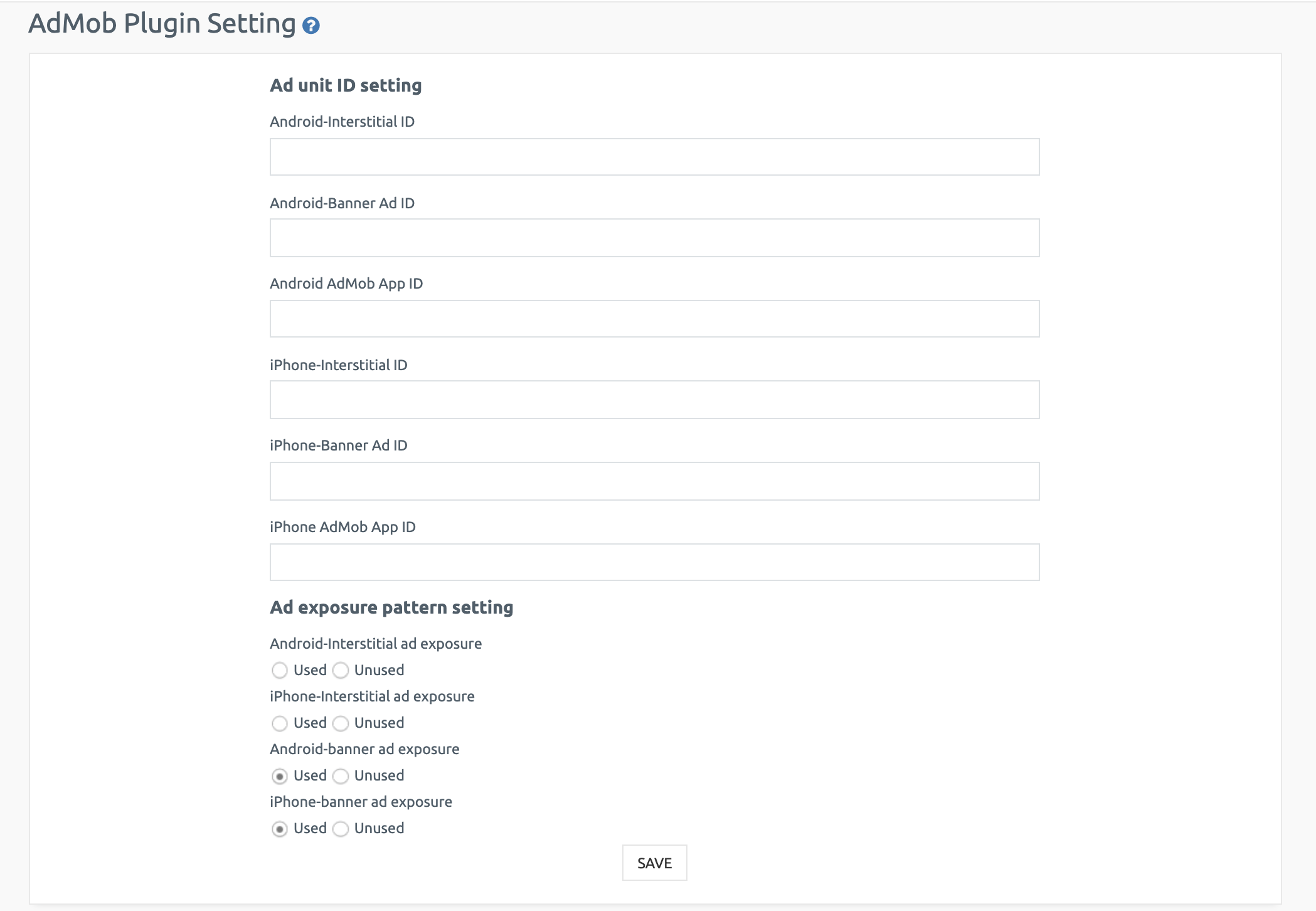 After purchasing an AdMob plug-in product, you can set the ad-mob advertisement directly in the user’s app.
Previously, it was done by applying to Swing2App.
Users can now insert their own ad IDs and freely set up and use their ad exposure patterns.

1) You can expose/display front ads in any form at any time.

Exposing the first time you run the app? Expose when switching app screens? Expose at a set time?
=> The administrator can easily modify it any time. You can also expect advertising revenue accordingly.

2) If you need to change your ad ID, you can change it easily anytime.

3) If the advertisement needs to be stopped for a while, it will be reflected directly in the app if the exposure is only ‘not used’.

For each app, it is easier to check how the ad ID is and how the exposure pattern is set within the swing-to-app site without having to go into the official ad-mob site.

3. How to Use the AdMob Plug-in Settings 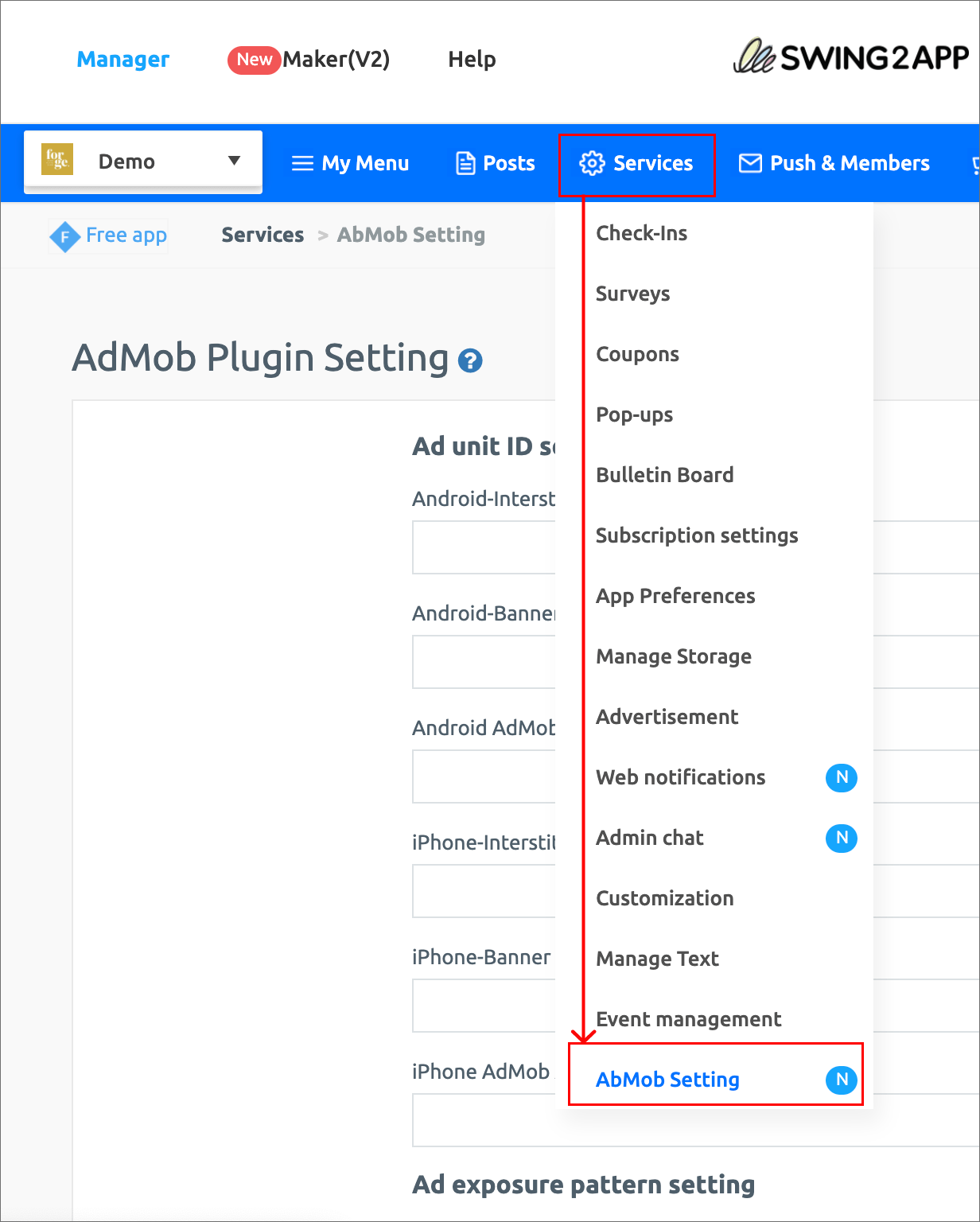 *Only available to users who are using the AdMob service. You must purchase an AdMob plug-in to open that page! 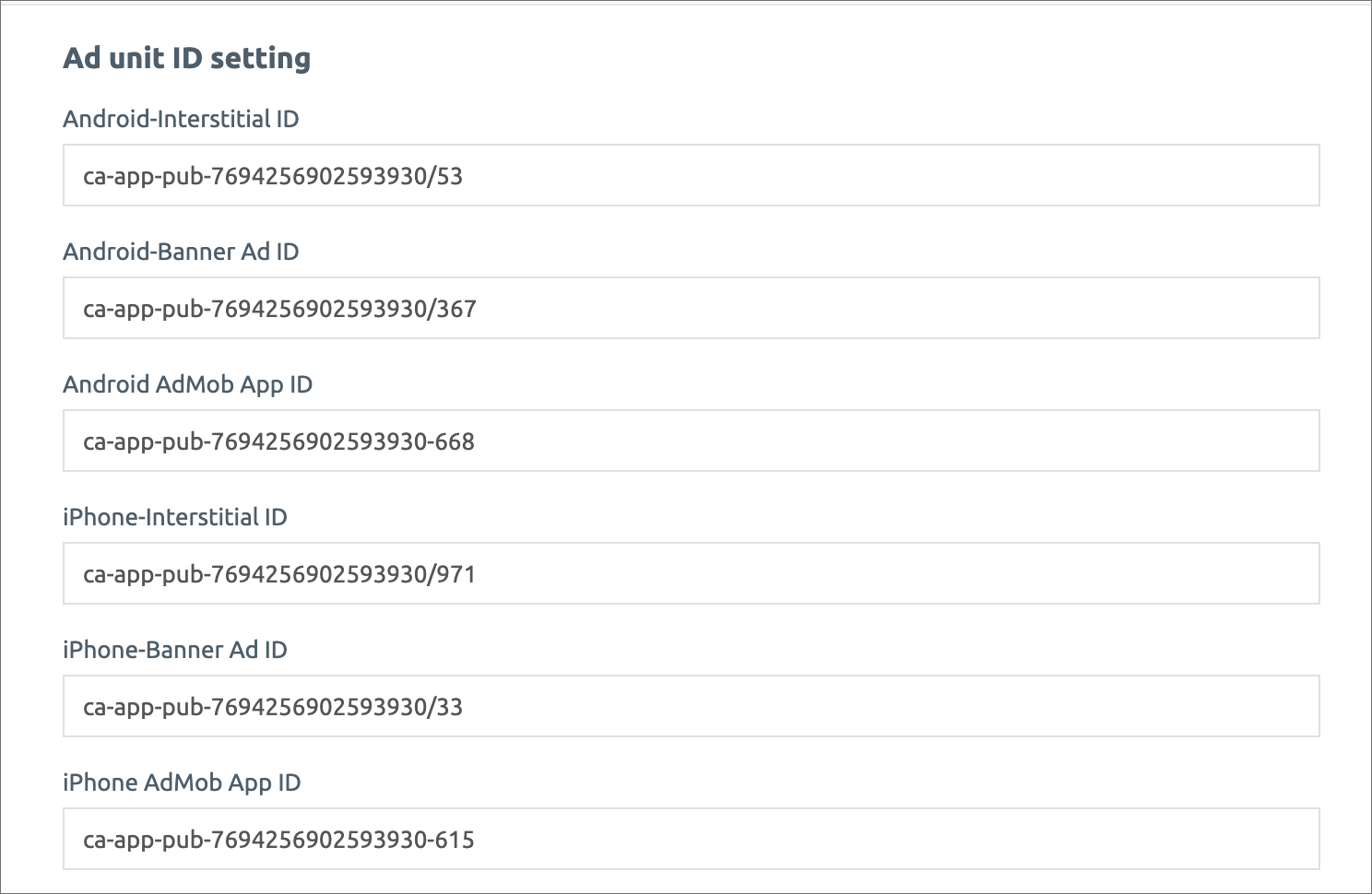 ☞Go to see how to sign up for Google AdMob and how to create an ad unit ID. 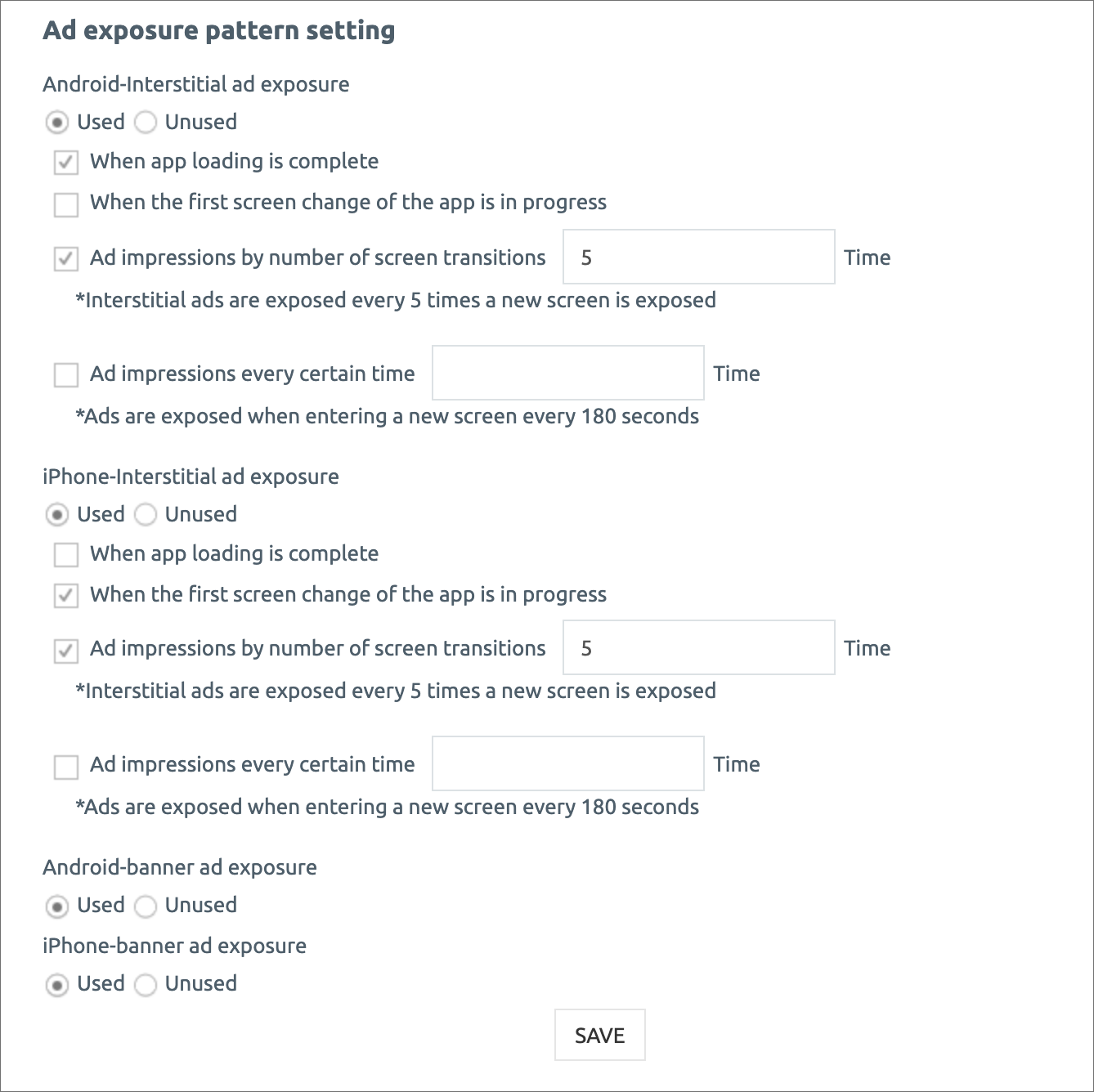 Please check both front and banner ads with ‘Used’ exposure.

*Front and banner ads are optional. You don’t have to expose both.
You can selectively apply it by exposing only the banner or just the front.

Banner ads can be completed by checking for ‘used’ exposure.
You can choose an exposure pattern for a full-page advertisement.

Banner ads are attached to the bottom of the app screen, so they are constantly exposed.
Therefore, you do not need to set the exposure.

Please be careful when setting up a full-page advertisement!
Too many ads can increase the inconvenience of app users, leading to ad-spam reporting.
If you receive a report, you can block the app ad from Google or delete the AdMob account itself if it is too much.
Therefore, please manage the advertisement exposure properly so that there are no policy problems.
Ad exposure by screen number of times + advertisement exposure every certain time is not recommended.
If you set it up together, please set the number of times or exposure time for a long.
*Please note that Swing to App will not solve the problem if the advertisement is suspended due to a violation of advertising policy.

How to set advertisements can be checked in detail by viewing the manual below.

☞ Go to see how to set up AdMob plugin advertisement

▶ Check the GIF) Let’s check if the advertisement is well displayed!

1) Only those who use the ad mob service after purchasing the AdMob plug-in will see the page.
Existing ad mob users are also available.

3) Please check the existing users of the AdMob.
If you modified the ad exposure pattern in the AdMob plug-in settings, please re-create the app.
**First! Please re-create the app only in edit. After the first modification, you only need to save the next modification.
-> If it’s on the Play Store or App Store, you need to update it to the newly created app with the modified ad settings.

4) Please check with new users who are planning to use it after the update
New users don’t have to leave their applications on Swing2App after purchasing an ad-mob plug-in product.
You can use the ad-mob plug-in setting screen after setting up the advertisement.
*After applying ad-mob advertisement, click [App Creation Request] on the app production page and update it to the new version.
You need to create a new app for the ad to take effect, and you can check the ad and release it in the App Store and Play Store.
You just need to save it when you edit the advertisement later.

5)You can check the front advertisement pattern setting and set it in the form you want.
You’re free to modify it at any time! Please re-produce the app only during the first setting.
After that, you just need to modify it and save it. If you exit and re-run the app, it will be reflected in the changed advertising settings.

6)Please take care of it so that it doesn’t become a problem.
You can edit your own exposure, so you can be greedy and expose too much.
But if the ads appear too often, the app user can report them to Google.
If you receive a report, you can block the app ad from Google or delete the AdMob account itself if it is too much.
Therefore, please manage the advertisement exposure properly so that there are no policy problems.

*Please note that Swing2App will not solve the problem if the advertisement is suspended due to a violation of advertising policy.​