Therefore, if you are using the free app again after the expiration of the paid version period, you can use the relevant manual.

first! Please check the precautions below before looking at the conversion method !!

1. You can switch to the free app only after the paid version app period expires.

If you still have a paid app subscription, you won’t be able to switch to the free app.

(Upon request, we can delete the voucher, but we will not provide a partial refund for the remaining period of use, the hold of the use date, etc.)

2. The converted app is provided as a free version app service.

-It will be converted into a free version service, including 100MB capacity, 30 bulletin boards, and one group chat room.

3. The free version app is a version that cannot be used in the store (Play Store, App Store).

The scope of using the free version app is only available for personal use (apk file installation, uploading the app file to the homepage, or personal blog).

Therefore, the app that was previously released in the store as a paid version becomes unavailable when it is converted to free.

*Users who installed before switching to free will also be unable to use the app when the app runs and an expiration message appears.

*If you release an app that has been released as a paid version, you can cancel the posting or delete the app from the store.

4. Available only on Android phones.

The free version app is only available on Android phones!!

1) Check the paid app that has expired.

3) Select the [App Creation Request] button on the app production page (if you create a new app, it will be converted to the free version).

5) If you run the free version app again, it will run normally.

6) In addition, users can directly download apps that have been uploaded to the Play Store.

(App Store will be provided upon request)

When you use the paid app and run the app that has expired, the message ‘Expiration of the term of use‘ appears as shown in the image above.

There are restrictions on the use of the app. (The app screen shuts down without appearing)

Please delete the paid app already installed on the Android phone because you have to download the converted app for free again. 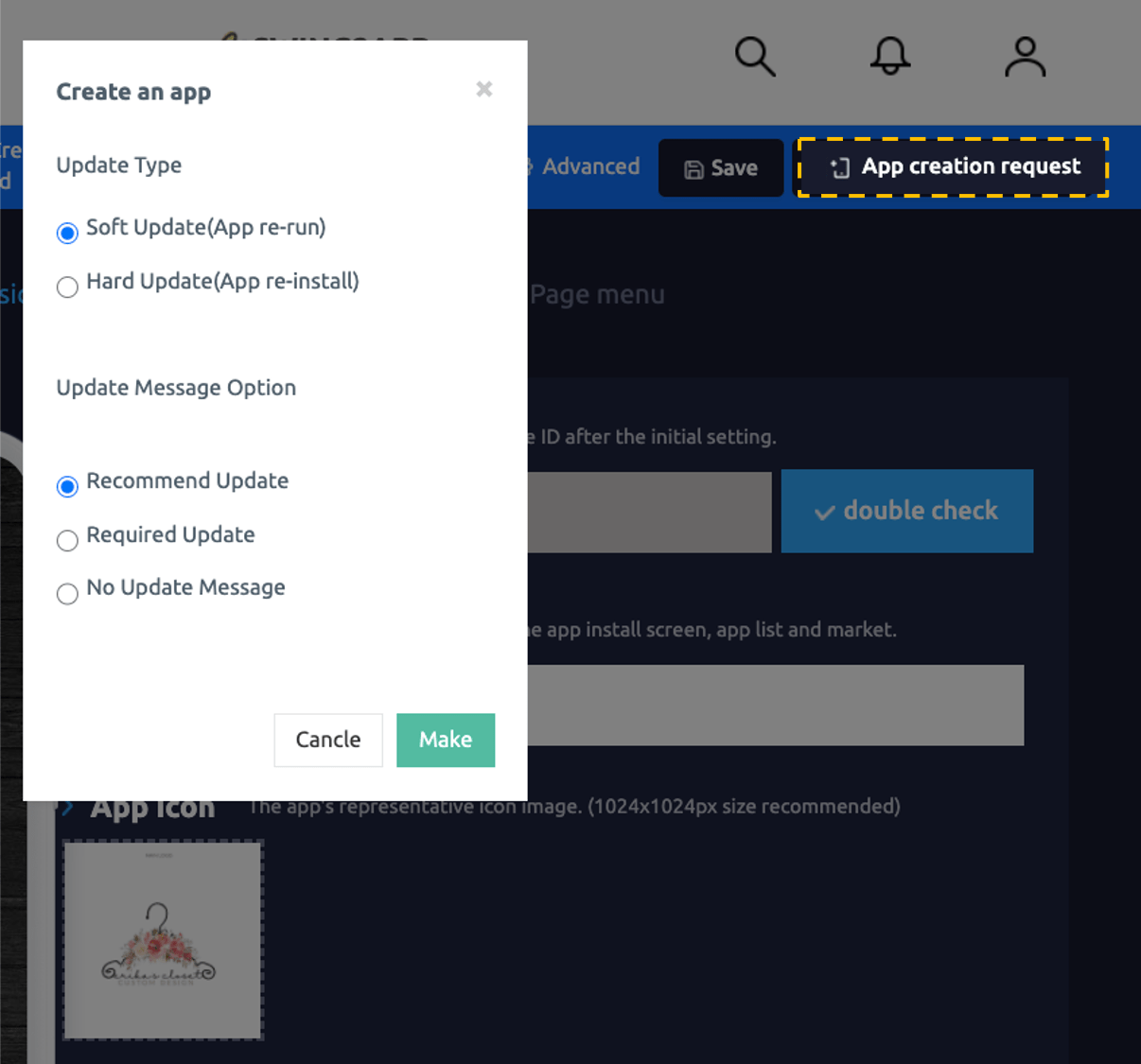 **If you re-create an expired app, the app will automatically switch for free!

So, go to the Swing2App Maker(V2) page and press the [App Creation Request] button to re-create the app!

If there is a content to be modified in the design or basic information, you can modify it and make it

*Instead of updating the app, you need to delete the existing app and reinstall it with the newly created app.

Therefore, it is not important to select and display the update type that appears when requesting an app. It doesn’t matter how you check it.

Click the [Make] button. Production is within 5 minutes, so please wait !!

The app download is the same. You can use it from the official Swing2App → App Preview.

After launching the official app, in the app preview menu-if you log in with your Swing2App account (homepage)-you can check the list of apps that you have created.

If you download the app again, you can see that the app is running normally.

If it’s not good to see that there are still expired apps on the Play Store or App Store!

You can upload an app so that it is not visible in the store, such as by unpublishing the app.

Those who have registered for the App Store with a Swing to App Apple account can drop the app by leaving it as an inquiry board!

1) Check the paid app that has expired

3) Select the [App creation request] button on the Maker(V2) page (if you create a new app, it will be converted to the free version)

5) If you run the free version app again, it will run normally.

6) In addition, users can directly download apps that have been uploaded to the Play Store.

(App Store will be provided upon request)

After the period of use expires, please use the free app as a reference to the manual for those who use it within personal use!